in praise of the suitor

“All I fcuking want is a man who can take charge, ignore my bullshit and the dumbass blog, and realize I’m more than words.  I’m messy.  I’ve got a scent and tears and a dog that craps on the floor. I’m not Town & Country hot.  I don’t drink milk and snack on red apples.  That has to be okay.  Why is it so hard to find a man who can just deal?  When I find him, God willing, you will all hear about it. His photo will be posted, beside the post, and you’ll all want to clap.”
–excerpt from this post written in February, 2005.  As promised… 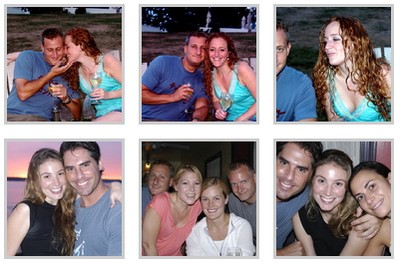 I’d met “the suitor” back in February, before the book deals.  When I say “met,” I mean “corresponded with” via email.  One of his first emails to me was on February 8, in response to one of my lists.  Here is some of what he wrote:

12. I don’t know where Wyoming or Montana are on the U.S. Map. Oklahoma, neither. i’m the smart one, you’re the cute one.
14. The second toe on both my feet is longer than my big toes. It’s called the Royalty Toe.  you’ll match my third nipple
19. I lost my virginity when I was 15 to a boy named Eric Fink.  a fink joke would be too easy.
23. Macaroni & Cheese is my ultimate comfort food  i love you, stephanie
31. I have never lost money gambling. I always win at Roulette. acceptance is the first step to healing
34. I once worked cold-calling people at home to sell Chimney Cleaning Services. i numbered urine samples for a lab in h.s., top that.
35. I am a distant cousin to the person who sings the theme song in the movie Manequin (Nothing’s gonna stop us now by Starship) name dropper
40. Yes, my hair is naturally red, and no you can’t make me prove it.  yes i can.
57. I own a cordless dewalt drill and keep it in my bedroom. no vibrator stories
58. “Lovey Dovey” is a terrible expression. Don’t say it.  agreed
60. I don’t like pizza. I’ll eat it, but I don’t like it. no pizza or power lines?  who are you?
63. I don’t understand people who eat onions like an apple.  are these the normal ‘rea’ people you were referring to?
67. I don’t understand how any woman can be seen in stockings and sneakers, even if it is a commute. There is absolutely no excuse for this.  i wish i had written his
69. Meryl Streep came up to me in a museum and told me she liked my hair.  that wasn’t meryl streep.
70. I don’t have much tolerance for dumb people.  dumb people like power lines, history and pizza.
72. I don’t understand people who do touristy things in any city.  this i will change your opinion on.
74. I’m an exceptional cook.  i dare you
85. So I married an axe murderer is one of the funniest movies I’ve ever seen.  “look at the size of that boys head!”
89. I am attracted to men that make me go crazy, and I hate being crazy.  let’s start with dinner, ok?
92. I can climax from having intercourse. Normal sex. is this not normal like ‘rea’?
95. I have a tough girl attitude, but really I’m a soft turtle inside and worry that the simplest things will make me cry.  if its not too forward, can i see your turtle please?
99. I like sex in the morning when I’m still half asleep, whether or not I’ve brushed my teeth.  check that, let’s start with breakfast, ok?
104. I was married.  me too.  we weren’t married to each other, were we?
134. I don’t think I’ve ever had a boy buy me lingerie. This makes me sad.  don’t be sad.  valentine’s day is a coming…
144. I hate when people use LOL. emoticons are lower than pun or mime.
145. I think the book The Rules sucks. I never play by them. I’m too impatient… I make my own.  i hope your rules include meeting me.

He made me laugh.  And think.  And want to meet him in person.  He asked me out for Valentine’s Day.  “Um, hello, I’m so not going out with a stranger on Valentine’s day.”  I was mildly depressed and decided instead to binge on McDangerous until I felt guilty.  Valentine’s Day isn’t as depressing on a Monday.  You can almost gloss over it by working late.  All in all, it wasn’t a loss; I wasn’t ready for anything then.  We finally met, I think a week later, at ‘Cesca, on the Upper West Side, after one of my Monday night classes.

After our polenta and wild mushrooms (the item I always order there), I was still hungry.  “You’re still hungry aren’t you?”  I liked him, right there, in that moment.  “Want to order the Paella?”  No, I loved him, right there, in that moment.  A lobster head sat between us, beads of rice clinging to mussel shells.  More wine.  He walked me home.  I texted him when I was finally upstairs and he was in a cab on his way home.  “I really can’t wait to see you again.”  Then we went out.  Again.  And again.  Speaking every day.  And then we didn’t.

I wasn’t ready.  Timing.  Something.  I was unsure.  So I kept dating, and I wrote about it, knowing he’d read it.  That worried me.  The last thing I ever wanted was to hurt him or ruin anything, but I was not about to stop doing what I needed to do for me… and that was blogging up all over myself.  “You write whatever you want, Stephanie Klein.”  I loved that I could be me.  He lets me know that being my most authentic self is when he loves me most.  When we’re out with other people, and I suddenly excuse myself to go write in my notebook at the bar, he gets it.  He knows it’s not about my lack of interest in him, it’s about my having to be me.

He calms me and makes me want to give him the world.  Mine is brighter with him in it, even if from time to time, I go languageless.