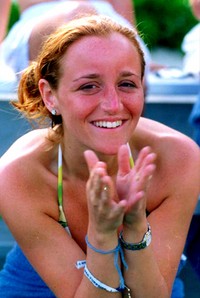 Turks & Caicos Club Med is for singles—very single, singles.  But, when I was in a commited relationship, I decided to plan a trip there for my MID to congratulate him for working so hard on studying for his Series 7 exam.  I figured we’d have more fun there, with the active nightlife, than we would at a boring couples retreat.  Non refundable.  Everything.

He postponed taking the test, and really needed to study, and really needed to pretend he wasn’t engaged by taking a German medical student to dinner.  When I found out, I confronted the girl, who said he would do it to me again.  “Nothing happened,” she said.  “Except for the fact that he pretended he was available.”  It would happen again, but according to everyone I spoke with at the time, he was just testing boundaries, needed to stroke his ego, needed to see that he still had what it took.  It was only flirting, they argued.  It’s not like he did anything.  I moved out and went to Club Med with my mother.

While there, MID called everyday, leaving phone messages that were delivered to me at the dinner table on small yellow sheets of paper.  “Please, I made a mistake.  Call me.  I love you.”  I didn’t call.  I slept in a small room, on a small bed next to my mother, and when I awoke, I’d sometimes forget where I was and imagine I still had a life with him.  I hated how he could creep into my head at night when my defenses were sleeping.  I hate how my body forgot and reached for him out of kinetics.  I’d awake with diarrhea.  I lost eight pounds on that vacation, even with the all you can eat buffets.

The worst thing anyone can say to me when I tell this story up until this point is, a breathy, “God, and you still stayed with him?”  ASSHOLE, I FUCKING KNOW.  Don’t you think I’ve asked myself this, hated myself for this?  I’ve spent too much time condemning myself for my choices, for believing in him and us, and loving anyone.  Don’t you think I know?  Jesus.  Shut your fcuking hole.

And we continue here.  So, before Club Med was seriously all-inclusive, you could purchase plastic beads that you’d exchange for adult beverages of your choice.  But, at dinner, the wine was always included.  As much as you could drink.  And so we did.  At the close of every meal, my communal table, mother, and I would cowboy up to the bottle and drink.  Drinking games included Thumper, I Never, and something with signs.  I grabbed my breasts.  My mother pretended she was shocked.  “Stephaniiiiieeee.”  Whatever.  Those games made me realize I could smile again, I could have fun on my own.  When we returned to New York, MID was waiting at the airport with flowers.  I did and didn’t want to see him.  I moved back in with him two weeks later.  I didn’t play another drinking game until two years after we broke up.  In the hamptons, playing Whale’s Tales.  I’m playing again, soon.